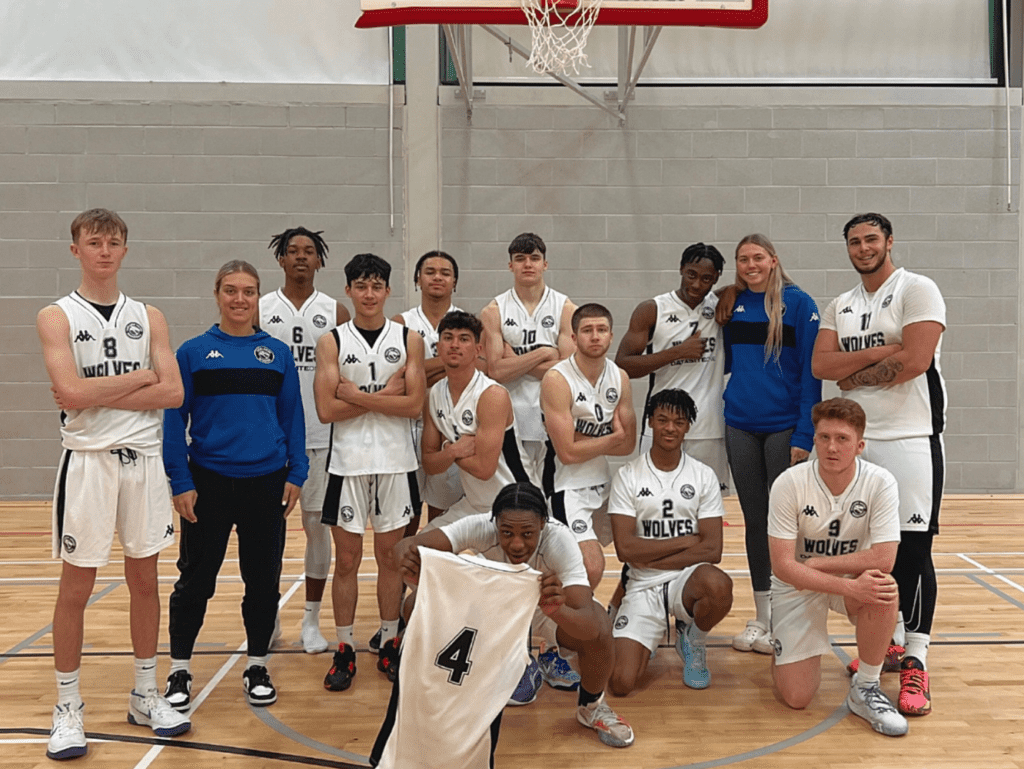 The Oaklands Wolves men’s 2nd basketball team qualified as AoC East Region champions yesterday after a closely fought tournament ended up with Oaklands College narrowly beating the College of West Anglia (CEA) by 3 points 20-17. Oaklands College will now progress on to the AoC National Championships to represent the East Region in April at Nottingham.

The tournament was split into two groups with Oaklands Men’s 2nd team finishing second in Pool A having lost by 1 point to CWA 16-17 having been ahead for most of the game but only to lose it in the dying seconds. It meant that the Wolfpack faced Pool B winners Peterborough College in the semi-final with Peterborough having powered through their group and boasting the most explosive offence in the tournament averaging 27 points per game. However Oaklands stifling defence held Peterborough to only 11 points and qualified for the final with a relatively comfortable 27-11 result.

The final was to be a rematch after CWA won their semi final 25-13 against Hills Road. Whether it was due to the fact that Oaklands only had 10 minutes to recover from their semi-final compared to CWA having 30 minutes or more to do with CWA making some early 3’s it was CWA to lead for most of the final game. However the final few minutes saw Oaklands come up with some key stops and make some key 3’s of their own against their opponents zone defence. Oaklands made key free throws in the final minute and then a last second opportunity for CWA to tie the game rimmed out and Oaklands now have a National Championship to look forwards too.

A special mention also the Men’s 3rd team who also entered the East Region tournament and after losing their first two games in Pool B came out with improved performances and beat East Norfolk 28-14 and USP (Seevic) 18-14 to finish third in their group and just miss out on a semi final place.

Head of Basketball Michael Ball commented “It was a great day of basketball and to see the Men’s 2nd team win the tournament in such an exciting final with a great atmosphere in the gym was outstanding. The Men’s 3rd team also had an excellent day and I think out teams benefited in this one quarter multi game format of giving every player court time. A special mention must be given to Head Performance Coach Lee Ryan and the work he is doing with the entire performance group and Men’s 2nd team Head Coach Jorjah Smith and Assistant Coach Grace George.”

It was also great to hear from Charlotte Greenwood, AoC development officer who added, “Thanks very much for hosting the basketball tournament yesterday. All went really well and the venue was great for the tournament. Thanks for all your help setting it up and running throughout the day. The table officials were absolutely brilliant. Please pass on my thanks to them.”

Coach Michael Ball finished saying “To hear feedback that our facilities, young officials and players represented the College so positively means as much to me as actually winning the event. It gives me an indication that on and off the court we are continuing to progress and giving each and every student athlete a development pathway alongside their studies.”

Our Centres and Facilities

Our Centres and Facilities

Stay Up To Date

Floristry department brighten up Claridges for the 4th year running

The Floristry department at Oaklands College were commissioned for the fourth year running to provide a number of displays for ...
Latest News

Oaklands College were visited last week by Pauline Bishop, who came to see how her generous donation of £4000 to ...
Latest News

Floristry department brighten up Claridges for the 4th year running

The Floristry department at Oaklands College were commissioned for the fourth year running to provide a number of displays for ...
Latest News

Oaklands College were visited last week by Pauline Bishop, who came to see how her generous donation of £4000 to ...